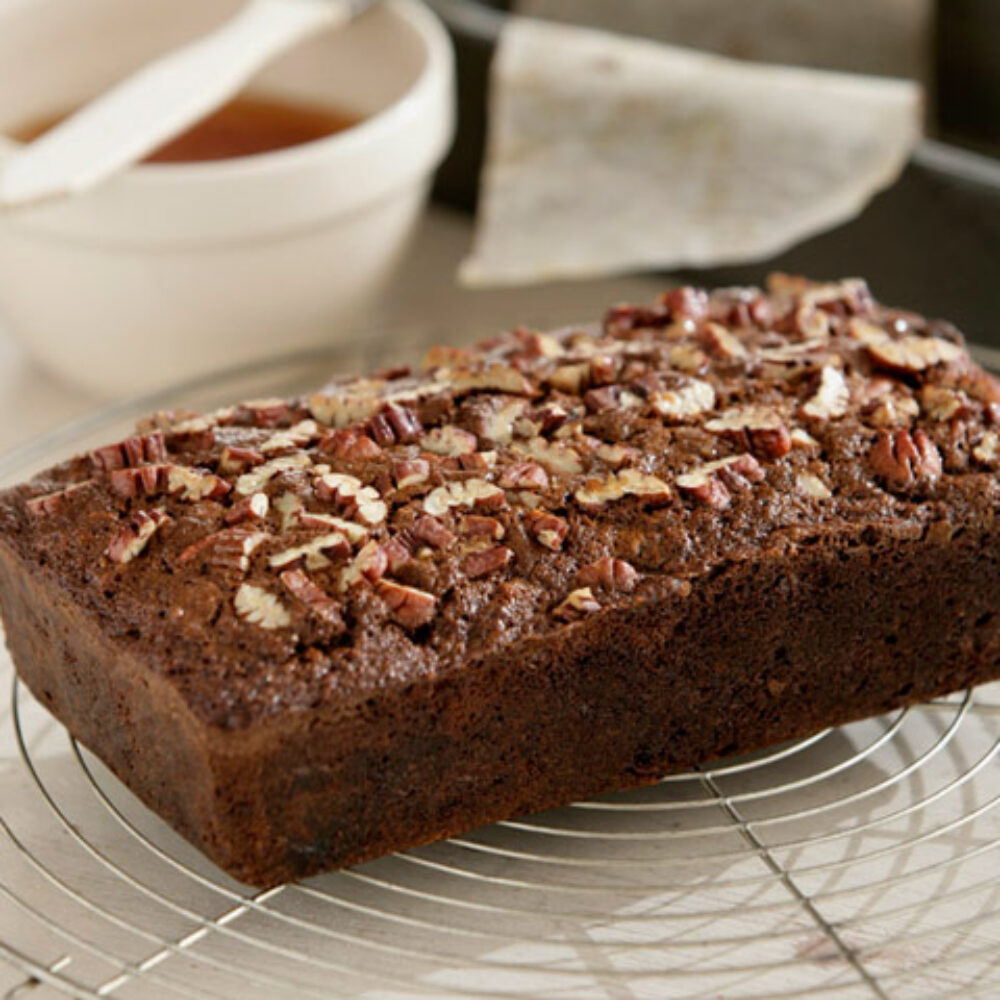 This dark, sticky loaf is remarkably easy to make once everything is measured out – just as well really for I find myself baking a loaf every few weeks at this time of year as I love its dense, luscious texture and warm, spicy flavour. Interestingly, it’s made with raw pumpkin rather than cooked and it’s this that makes the bread so moist. I tend to make it with spelt flour however you can use wholemeal instead.

Preheat your oven to 180C. Butter a large non-stick loaf tin (approximately 23 x 13 x 7cm) and line the base with buttered baking paper, then dust with flour and set aside.

In a large bowl, use a balloon whisk to mix together the flour, brown sugar, bicarbonate of soda, cinnamon, ginger and nutmeg. Do this for a couple of minutes so any lumps in the sugar disappear. Tip in the raisins, pecans and pumpkin and toss them about so they’re well-coated in the mixture.

In a separate bowl, whisk together the eggs, oil, milk and vanilla extract until they’re smooth and creamy. Pour this egg mixture into the flour mixture and stir them together until they’re well combined. Scrape the batter into the prepared tin, smooth it out and sprinkle pepitas or sliced pecans over the top.

Bake the loaf for about I hour or until a fine skewer inserted in the middle comes out clean. Cool the loaf in the tin on a wire rack for 8 minutes, then gently loosen around the sides before turning it out onto the rack to cool completely.

You can freeze the loaf whole, but what I usually do is slice it, put freezer wrap between each slice, and then freeze it; it keeps well for 3-4 weeks. This way you can just take out a slice or two (or three!)) as you need them.

The best way to think of spelt is as a cousin of wheat; it’s a member of the same family but an entirely different species. The flour has a good nutty flavour and is also nutritious as it has large amounts of B-complex vitamins and is very high in fibre. But perhaps the thing that has brought it most recently to public attention is that although it contains gluten, it’s often well tolerated by many people with gluten allergies or sensitivities.