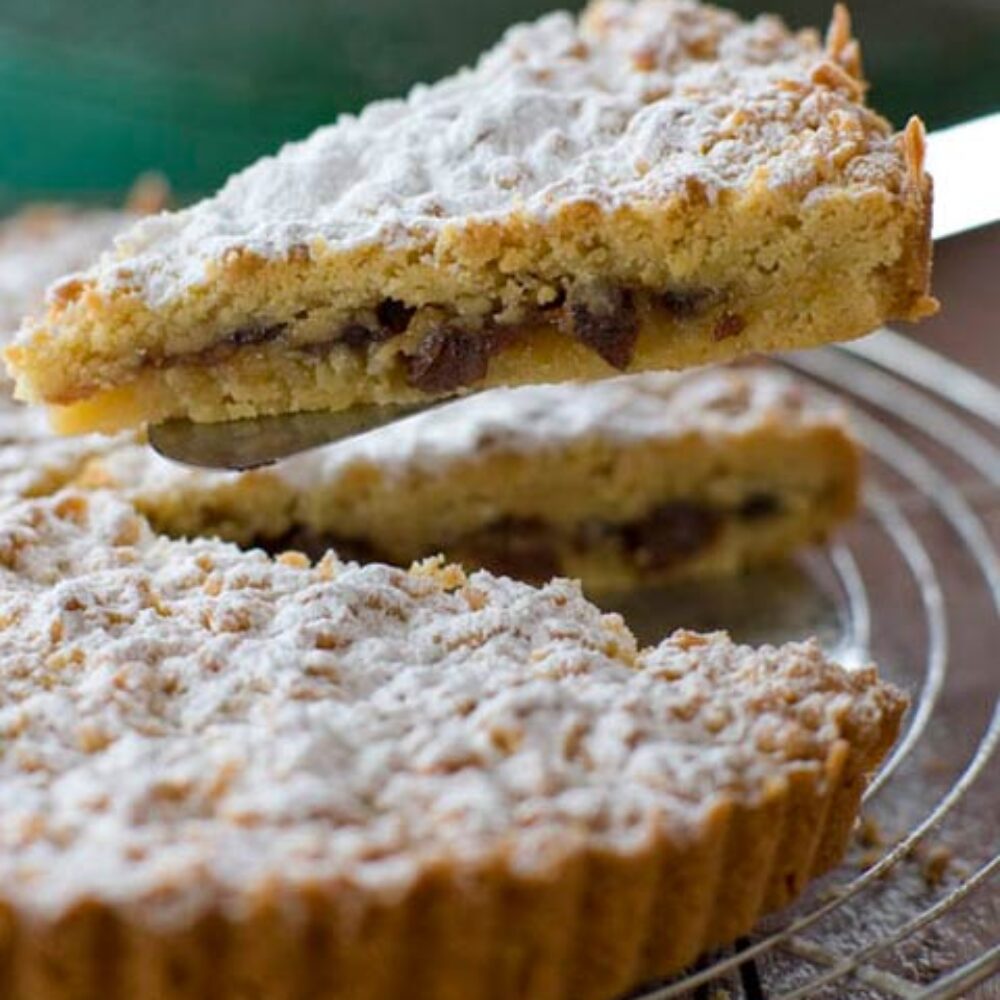 What’s that saying about the path to heaven being paved with good intentions? Well, hopefully my Christmas good intentions will help pave my way! For I always resolve to make mince pies for Christmas, as they are one of my favourite things, but time invariably gets away from me and I rarely end up doing them. Having said that, I have been known to stay up on Christmas Eve baking batch after batch as gifts, but this really is cutting things a bit fine!

So last Christmas I decided I would have to do something (anything!) to get my mince pie fix and this recipe is the result. It is soooo easy to make and tastes wonderful – crisp buttery shortbread encasing a lovely boozy fruit mince filling. Ideally the fruit mince would be homemade, but there is nothing wrong with using a good bought one – I often do. And although the end result may not be look quite as whimsical as bite-sized mince pies, it does look very pretty and Christmassy in its own way, with its lacy shortbread top and dusting of icing sugar.

Put the flour, baking powder and salt into the bowl of a food processor and whiz them together so they’re thoroughly mixed. Tip them into a bowl.

Cut the butter into rough chunks and put it in the food processor along with the caster sugar. Whiz for about 40 seconds until the mixture is pale and creamy (you may need to stop the machine and scrape down the sides once or twice). Add the egg yolks and vanilla, then process again for 15 seconds or so until well combined.

Now add the flour mixture to the butter mixture and pulse the machine in short bursts until a ball of dough forms around the blade (try not to over-do this mixing or the shortbread may be a bit tough).

Turn the dough out onto a very lightly floured board and shape it into a log (if the dough seems too soft to do this, chill it for a little while first so it firms up enough to handle comfortably). Divide it in half and wrap each piece in plastic film. Put the dough logs in the fridge and chill them for at least 3 hours (or you can leave them overnight) until they are really firm.

Preheat your oven to 180C and very lightly butter a 25cm loose-based tart tin. Remove one of the dough logs from the fridge. Use the side of a box grater with the largest holes to grate the dough onto a plate. I tend to do this in batches as the grater fills quite quickly and the dough strands will squash if they become too compacted. As you finish each batch carefully transfer the grated dough to the prepared tin. When you have finished grating it, gently pat the dough strands out evenly over the base of the tin, trying not to squash them down too much.

Now dollop the fruit mince evenly over the grated dough then smooth it out thinly as best you can with a palette knife, leaving a 1cm border all the way around the edges. Grate the remaining log of dough the same way as before and sprinkle it over the fruit mince. Give it the lightest pat down to even it out.

Carefully transfer the tin to the oven (watch out you don’t ‘pop’ the base up – I’ve been known to do this!) and bake the pie for about 35 minutes, or until it’s golden brown. Remove it from the oven and leave it to cool completely in the tin on a rack.

To serve, gently remove the pie from the tin, dust it with icing sugar and cut it into wedges. It’s equally lovely served simply with a cup of tea, or as dessert with a spoonful of double thick cream or, to be really Christmassy, a little brandy or rum butter.