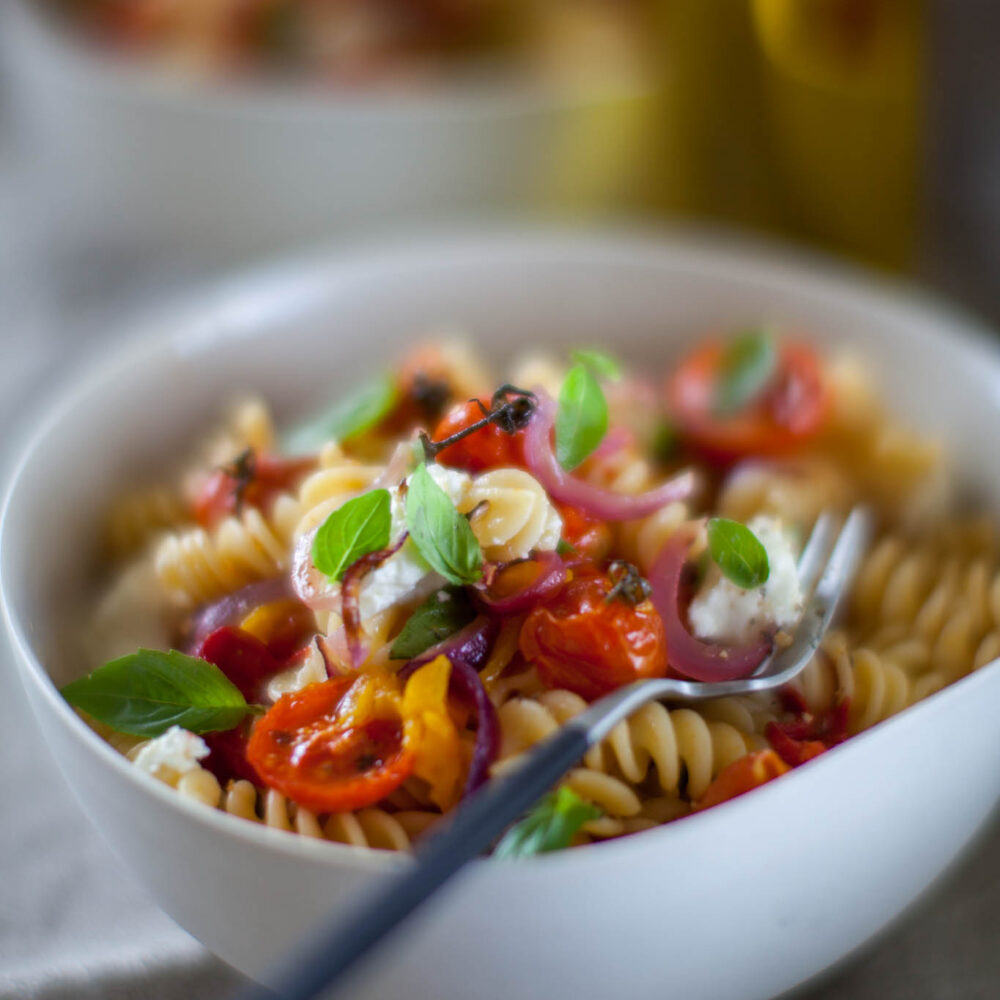 I love that the basic tomato mixture for this pasta dish is so versatile. Stir it through cooked fusilli along with goat’s cheese, let it cool to room temperature, and you have the most fragrant pasta salad; mix it into a bowlful of cooked white beans (or chickpeas for that matter) with a handful of inky sun-dried olives, and it makes a gorgeous bean salad; or just serve it as is, alongside almost anything that can be barbecued – fish, chicken, beef, lamb, eggplant – it makes them all taste just that bit more special. And please just use these quantities as a guide, I’m forever mixing and matching what goes into it.

3 large cloves garlic, unpeeled, pricked once or twice with a fine skewer

Small handful basil leaves (as much or as little as you like), washed and dried

Preheat your oven to 180C and line a large oven tray with foil then baking paper.

Put the tomatoes (I quite often leave the really tiny ones in clusters and halve any extra-large ones), garlic, onion, and chopped chilli in a medium-sized bowl, pour in the olive oil then gently mix them together. Tip the mixture onto the prepared tray, leaving a bit of oil in the bottom of the bowl, then spread the tomatoes out evenly so they’re in a single layer. Add the pepper (capsicum) quarters to the oil remaining in the bowl, rub them until they’re glistening, then sit them, skin-side up, at one end of the tray.

Put the tray into the oven, and roast the mixture for about 30 minutes, or until the tomatoes are soft and their skins are starting to split. (The onions and peppers will be colouring up). Remove the tray from the oven, and leave the mixture for a few minutes until it’s cool enough to touch, then scoop out the peppers (capsicums) and garlic.

Peel away the skins from the peppers (capsicums), then slice the flesh into narrow strips and return them to the oven tray. Squeeze the garlic flesh (which will be very squishy and soft) out of its skins into the tomato mixture.

Use the foil and baking paper to help funnel the tomato mixture in the tray into a large stainless steel bowl. Mush it up a little with a potato masher so it becomes a very chunky sauce. Add the sliced olives if using, then gently stir them together. Return the bowl to the turned-off oven to keep the mixture warm. Just before serving, roughly tear most of the basil leaves and stir them into the mixture along with salt and pepper to taste.

To cook the fusilli, bring a large saucepan of water to the boil over high heat. Once the water is boiling, salt it liberally (I operate on 2-3 teaspoons of salt per litre of water). When it returns to the boil, add the fusilli, stirring once or twice initially to keep it separate. Cook until it’s al dente. As you’re probably well aware, the timing for this varies from pasta to pasta, so after 5 minutes or so I usually start fishing out pieces of fusilli, blowing on them until they cool, then biting into them – when they’re ready they should still have a little bit of resilience between your teeth. Drain the fusilli in a colander, shaking out the excess water, then return it to the saucepan and add the tomato mixture. Thoroughly mix everything together.

Line up the pasta serving bowls on your benchtop. Roughly tear 3 rocket leaves into the base of each bowl along with a little crushed goat’s cheese. Scoop in the pasta mixture, then sprinkle the remaining goat’s cheese and basil leaves over the top. Finish off with a good grinding of black pepper. What I love about this is that the goat’s cheese becomes soft and creamy when the hot pasta is added, and once it’s mixed, forms a lovely ‘sauce’ with the tomatoes. This is terrific served warm or at room temperature.