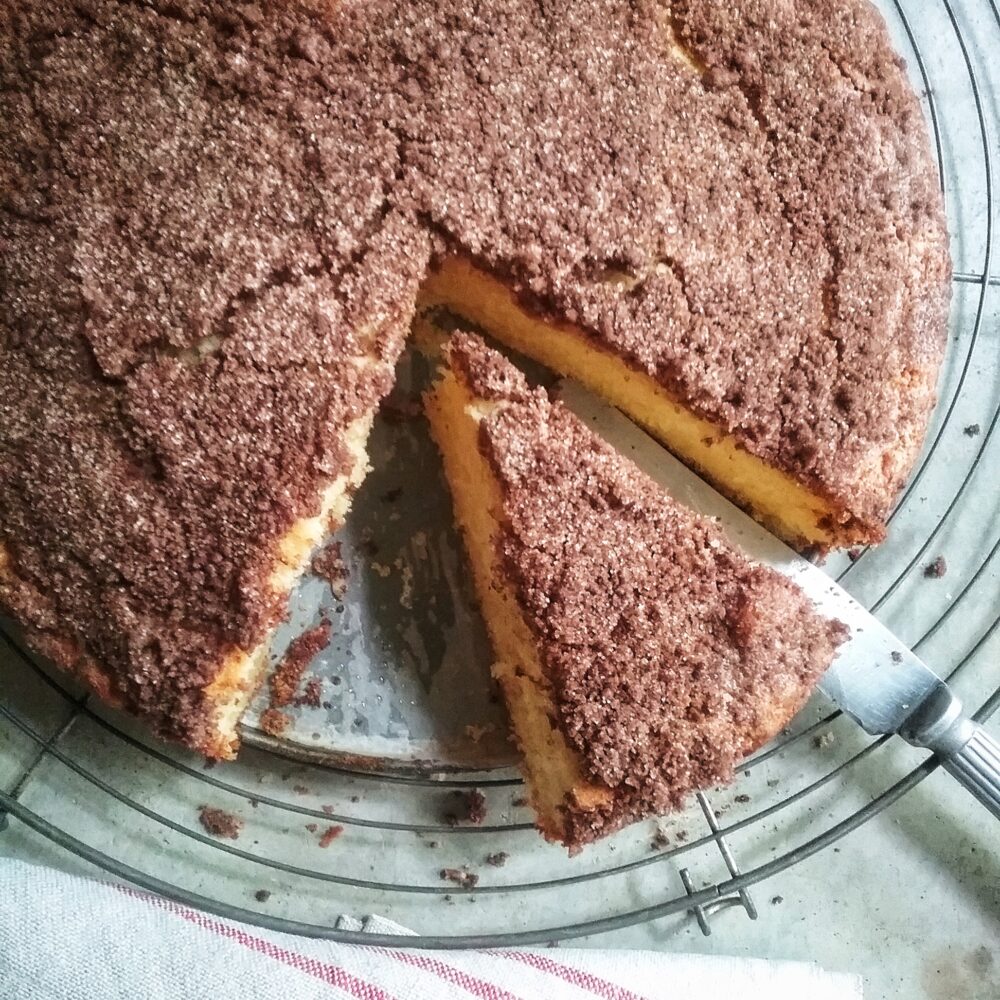 This is the cake of my childhood, a comfort cake, the one my mum could bake with her eyes closed, the one that tasted of home, the one that was whipped up in a flash for afternoon tea, the fragrance of cinnamon and butter drawing us into the kitchen.

Mum taught me to make it when I was 7 years old. She would get down her Country Women’s Association cookbook, its pages smudged from use; out would come her mixing bowl, wooden spoon, and the basics – butter, sugar, flour, eggs, vanilla and cinnamon. I would butter and flour the tin, mix the cinnamon and sugar together, and by the time I’d done this she would have beaten the butter and sugar until creamy. Next came the eggs – at room temperature, and strictly one at a time or, she told me, the batter would curdle. Finally, flour was sifted over the top and gently folded in. She would smooth the batter into the tin, and I would sprinkle a thick layer of cinnamon sugar over the top, then into the oven it would go.

There were many variations. Sometimes apples would be sliced and pressed into the batter; at others, a handful of chopped almonds or hazelnuts would be mixed into the cinnamon sugar, or an extra sprinkling of sugar and cinnamon would be swirled through the batter. They all tasted wonderful.

This is my somewhat updated version of her recipe. It’s not a bells and whistles sort of cake, but it’s absolutely perfect for when you crave something comforting and wholesome.

Preheat your oven to 180C. Butter 23cm springform tin, press a circle of buttered baking paper into the base, then dust the tin lightly with flour.

For the topping, put the sugar, flour and cinnamon into the bowl of a food processor fitted with the steel blade and whiz them briefly until they’re well combined. Dot the cold butter over the top, and pulse it in until the mixture resembles breadcrumbs. Scoop the mixture into a small bowl, and tuck it in the fridge while you get on with the cake batter.

Combine the self-raising flour and salt in a bowl, and whisk them together with a balloon whisk until they’re thoroughly mixed.

Put the eggs and sugar into the processor and whiz them for 1 minute. Dot the butter chunks over the top and process everything for another minute. (The mixture may look a bit curdled at this stage, but don’t worry, it will be fine.) Now add the vanilla, half the flour and half the milk, and pulse the processor with quick on/off bursts just to mix them in. Scrape down the sides with a rubber spatula. Add the remaining flour and milk and again mix them in with quick bursts, until the batter is just combined (don’t overdo it or the cake will be tough.) Scoop the batter into the prepared tin and smooth it out. Sprinkle the cinnamon sugar mixture evenly over the top. (If you’d like to add apple slices or a swirl of extra cinnamon sugar, do this before sprinkling on the topping.)

Pop the cake in the oven and bake it for 40 – 45 minutes, or until a fine skewer inserted into the middle comes out clean. Cool the cake in the tin for 10 minutes, then release and remove the sides. You can leave the cake to cool completely or serve it warm (although not traditional, a dollop of softly whipped cream doesn’t go amiss!) One interesting thing I’ve noticed about this cake is that the cinnamon flavour becomes more pronounced as the topping softens a bit. Serve with butter.

Leftover cake keeps well for up to three days in a tightly sealed container at cool room temperature, or can be frozen for a couple of weeks.