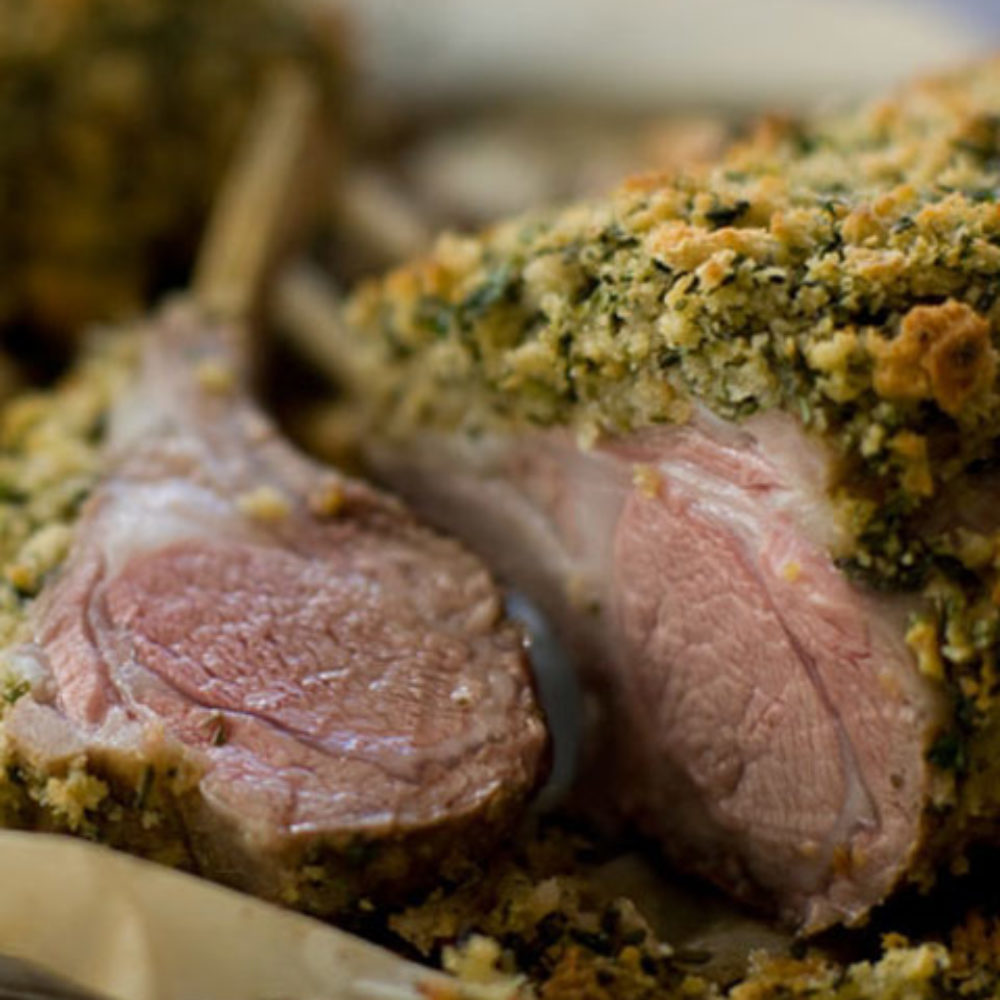 Lamb and Easter always go hand in hand for me and invariably at some stage I cook a lamb roast – my mum traditionally cooked a leg of lamb, however I must admit I rather favour this simple rack. It’s a classic dish and well worth perfecting as it’s just so easy to make, and the results are spectacular. The herb mixture coats the racks thickly becoming lovely and crunchy as it cooks, and the racks themselves look really impressive with their crisp green and gold coating.

I know if you haven’t cooked rack of lamb before that the idea might seem a bit intimidating, but if you just think of it as a whole lot of lamb cutlets joined together it becomes much less worrisome! More often than not I serve it with roasted onions topped with a little goat’s cheese and thyme and either something steamed and green, like spinach, or a simple watercress and fennel salad as its mineral flavour really complements the gentle sweetness of the lamb.

Preheat your oven to 220C. Line a baking tray with baking paper.

Sit the racks, fat-side up, on the prepared tray. Pop them in the oven to roast for 12 minutes. When they’re done, take them out and leave them to cool a little while you make the herb coating. This is really easy to do, just put the breadcrumbs, chopped herbs, garlic and salt into a bowl and stir them together. Now drizzle in the olive oil and mix it in well.

Spread the cooled lamb with a layer of mustard over the fat side, base and cut sides of the racks (there’s no need to spread it over the rib bones or undersides of the racks.) Use your fingers to press a thick layer of the herb coating all over the mustard. Don’t worry if a few little bits of coating drop off onto the tray – I just leave them there, pushing them up against the racks, so that as the lamb cooks the crumbs soak up some of the juices and become lovely and crunchy. (I have to admit, these succulent little morsels often don’t make it to the table, as I end up eating them while the racks are settling after cooking.)

When the racks are coated with the herb mixture, return them to the oven and cook them for 20-25 minutes for pink lamb; unfortunately, you have to wing it just a little with the cooking time, as it depends on the size of racks. The ones we buy locally are fairly substantial whereas when we lived in the city, I used to get much smaller ones which took less time to cook. The way I check, is to prod the thickest part of the meat carefully (so I don’t dislodge the crust) when I think it’s ready – it should feel a little springy, but not bouncy, if that makes sense.

Remove the tray from the oven, cover the racks loosely with foil and leave them in a warm spot to settle for at least 10 minutes.

To serve the lamb, slice down between the cutlets – you can carve them into single cutlets if you like, however I usually carve them into racks of three, as they look a bit more impressive like this. Sit the lamb on individual plates and garnish it with herb sprigs.